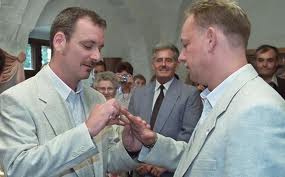 Same-sex married couples have tough tax filing issues, far more complex than heterosexual couples.  Clearly that shouldn’t be true, but for the time being it is.  To its credit, New York State has released helpful information about tax filing under the Marriage Equality Act.  The Marriage Equality Act was signed into law June 24, 2011.  Little more than a month later the New York Department of Taxation and Finance weighed in with this guidance.

Here are the highlights:

Different Filing Status.  Same-sex married couples in New York must file their personal tax returns as married even though their marriage isn’t recognized for federal tax purposes.  You use a filing status of single or head of household on your federal Form 1040, but for New York, either married filing jointly or married filing separately.

Different Tax.  To determine your New York tax, recompute your federal income tax as if you were married for federal purposes.  That means the married return you would file with the IRS if you could.  But this isn’t your real federal return, so don’t submit it to the IRS.  Use it only to complete your New York return.

Estimated Payments.  If you make estimated tax payments, recompute your estimate based on a married filing status.

Different Years.  If you are married by December 31, 2011 you’ll be considered married for the entire year so file your New York return using a married filing status for 2011.  But New York’s Act isn’t retroactive, so even if you were legally married in another state before July 24, 2011, you aren’t “married” for New York tax purposes until July 24, 2011.

An oversimplification of this guidance is that registered domestic partners in California must split their joint income and their tax withholding 50/50.  However, each still has to file individually.  See Gay Couples Get Equal Tax Treatment.  This guidance applies to Washington and Nevada too.

The 50/50 split is a creature of community property law and is not optional.  If a couple divvies up income, is one partner making a transfer to the other?  Fortunately, this is not considered to be making a gift that could incur gift tax.  While that is good news, details how to fill out tax returns are not so easy.  Suggestions are to e-file and you may need professional help.  See For Same Sex Couples, a Tax Victory That Doesn’t Feel Like One.

Tax reporting for same-sex couples still needs work, especially when you consider the mix of federal and state law.  Nevertheless, the largest tax problems posed by lack of parity between heterosexual and same-sex couples can be the tax treatment of splitting up.  Divorce tax rules are fairly straightforward and ameliorative.  If you’re not married and divvy up assets, the tax impact can be severe.